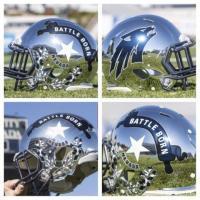 No way Nevada goes for Biden! Convert is out there harvesting ballots as we speak. 🤣🤪

Prediction: these weekend warrior, militia types will do great in the Second American Civil War...as long as it doesn’t involve any running, standing up too fast from a seated position, or pretty much

Ol, I'm gonna put my nuts on the line here and make my real prediction. This feels like the Y2k situation to me. Not the 2000 election but all the hype about the new years apocalypse that ended u